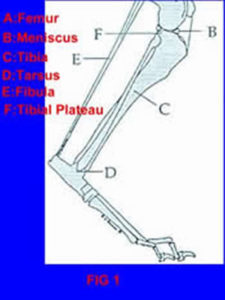 Being a 4-legged quadruped, it stands to reason that the mechanics of the canine knee would be different compared to human beings.

In 1982, the mechanics of the canine stifle were hypothesised and a phenomenon called Cranial Tibial Thrust was described. This is a natural force within the normal canine stifle and it is created because of the natural backwards slope of the articular surface of the tibia. [Fig 2]. Simpy put, there is tendency for the tibia to fall forwards because of its backward-facing slope that the femur has to sit on.

The cranial cruciate ligament constantly counters this thrust and holds the 2 bones in apposition to each other.

Understanding how this force is created, led to the design of a surgical procedure for repairing ruptured cruciate ligaments in the canine stifle, namely the:

Let’s have a look at the normal canine stifle: 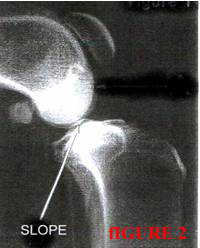 The normal canine stifle is shown in Fig1 and Fig2. The cruciate ligaments which stabilise the stifle are shown in Fig3. The key to understanding the lameness that follows cruciate ligament rupture is in understanding the forces generated in the stifle. All the forces of the foot are transmitted through the tibia (Fig1-C). This single force between the tibia and the femur exerts a constant, compressive pressure downwards. The top portion of the tibia, the tibial plateau (Fig2), is sloped backwards. 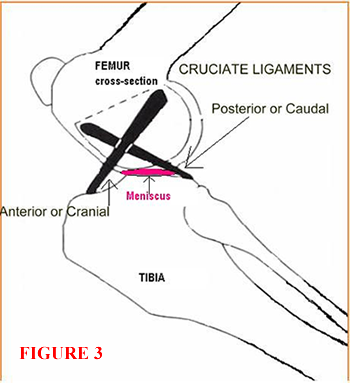 Ruptures [as in Fig 4] come in several varieties: there are singular incidents which cause a sudden, complete rupture with a lot of pain and a non-weight bearing lameness. This is common in human athletes and rugby players. This is also common in very young dogs. Other ruptures occur in small increments or a little bit at a time and tend to occur in the mature dog. These are known as partial ruptures and cause a small amount of pain and a mild lameness. They often then progress eventually to full ruptures, but the instability of the stifle may still be subtle because of the ongoing, progressing arthritis that has developed since the original damage. Eventually full-time lameness results.

Both types of rupture result in long term lameness and osteoarthritis of the stifle joint.

Today, the Tibial Plateau Levelling Osteotomy [TPLO] is used to overcome the effects of the cranial tibial thrust.

Essentially, the tibial plateau is cut and rotated so that the top of the tibia is flattened to take away the slope. By doing this, the cranial tibial thrust is neutralised and there is now no need for a ligament to counter the thrust. The tibial plateau is cut with a specialised bone saw, rotated into a neutral position and then held in place by a specialised plate and screws [Fig5].

This has a very stabilising effect on the whole stifle and returns the dog to normal function more quickly and more permanently.

The other procedure that is performed at this stage is to check the state of the meniscus, the cartilage cushion between the bones [Fig1B]. This is frequently damaged in traumatic cruciate ruptures, creating tears or segments that may require sectioning.

Note that there is a lot of bone cutting in this procedure and it takes about 2 months for the bone to heal. The soft tissues may take slightly longer. Xrays are required after 6-8 weeks to ensure that bone healing is complete. Often this procedure eliminates joint pain quite quickly and the hardest part of recovery is to get the dogs to take it easy.

This also requires discipline from the owners to not overdo activity during the protracted healing process and a handout is given to owners to guide them through the post-operative period.

The long term results however are much more satisfactory than the traditional methods.